As we kick off 2019, the engineering team is working towards solutions to the challenges we face with System 001, while the research team remains focused on the study of oceanic plastic pollution. We believe that it is essential to understand the problem of ocean plastic pollution if we are to effectively solve it. Fortunately, our operations in the North Pacific have provided a great opportunity to conduct additional sampling to further the mission of our research.

At present, we are busy working towards establishing a plastic mass budget in the ocean. This means understanding where ocean plastic is coming from, where it is accumulating, and what happens to it in the long term. These questions involve improving our knowledge of various processes occurring at very different timescales. These questions are also essential to optimize mitigation strategies and the future of cleanup operations. Turning the tide on ocean plastics will require a combination of both preventive and curative strategies; from controlled consumer demand and material innovation to invest in better waste management infrastructures and collection technologies.

One important aspect of establishing a plastic budget in the ocean is our understanding of plastic emissions into the ocean. Following an initial assessment of global riverine emissions published in 2017, we realized it was difficult to precisely predict where and how much plastic was entering the ocean. We understood that plastic emissions greatly depend on the geography of waste generation when associated with topography and hydrology. Thus, we first decided to investigate geographical variations of mismanaged plastic waste generation.

For the 2015 calendar year, we estimated that between 60 and 99 million metric tons of municipal plastic waste were improperly disposed of and released into the environment. A fraction of this waste will eventually be transported into the ocean. A nearly one-kilometer resolution distribution of where this waste was generated is presented in this interactive map.
in this interactive map.

Wealthy, industrialized economies generate the highest amount of plastic waste per capita with values as high as over 100 kilograms per year and per inhabitant. In populous countries, such as China and India, a lower use of plastic per capita coupled with a high population density can still yield large volumes of plastic waste. Particularly, in densely populated developing economies, high rates of plastic waste generation combined with inappropriate waste management infrastructures result in significant volumes of plastic waste leaking into the environment. Currently, the global geography of mismanaged plastic waste generation is disproportionally higher in Asian and African continents. Note that our model does not account for the unfair practice of waste trade between industrialized and developing economies, which may exacerbate this disproportion.

The benefit of using socio-economic indicators, such as population density and GDP, to predict waste generation is that this information is actively studied and projections into the future are available. We used these projections in our model and assessed the generation and disposal of plastic under three scenarios. 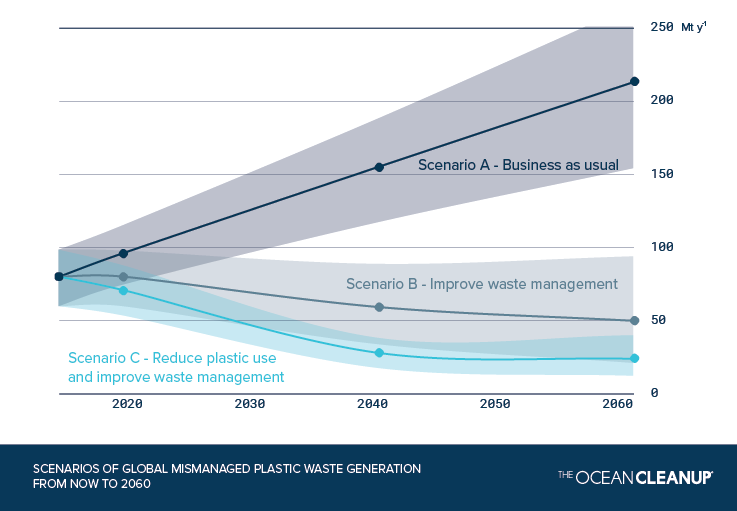 Our first scenario was a business-as-usual case where consumer plastic demand grows with the economy and the population, and where no further effort is made for waste management. Under uncontrolled growth in demand for plastic, with current standards of waste management, global emissions into the environment could double by mid-century.

We tested a second scenario where waste management infrastructures would improve over time as the economy of a country grows. Reported national waste data shows that levels of waste management infrastructure generally increase with GDP per capita, internationally. Thus, the more affluent the country, the more waste it generates per inhabitant, but the better it is at managing its waste. Under this scenario, global emissions could start decreasing by 2020 as investment of waste management offsets the increase in population and consumer demand. The main hotspots of mismanaged plastic waste generation would gradually move from Asia to Africa. This scenario would require major contributors like China or India to reach Western standards for waste management as their economies align with wealthier countries in the coming decades.

Finally, we introduced a third scenario where waste management improvement would be joined with efforts to reduce plastic waste globally. As of 2018, there were 27 countries that enacted policies implementing bans on (some) single-use plastics. To reflect the growing international willingness to reduce plastic waste, we established a scenario where the mass fraction of plastic in municipal waste would be capped at a global average of ~10% for all countries by 2030 and 5% by 2040. These values are achievable, as some industrialized countries already report such reduced levels. Denmark, for instance, the first country to establish a tax on single-use plastic bags, now reports less than 5% of solid waste made of plastic. In this scenario, global emissions could be reduced to a third by mid-century, even with a growing population.

Plastic continuously entering the ocean is a challenge we face on a global level. If nothing is done, the problem is expected to double in the coming decades. Fortunately, current behaviors, emerging innovations and new legislation exemplify that there is a demand to reduce the output; and this can be a significant reduction – if approached from multiple angles.

We conclude that the solution to this epidemic will likely come from a combination of reduction targets (particularly with packaging and single-use plastics), innovation in materials science and significant investments in waste management infrastructures, with more interception points for ocean-bound plastic. These preventive measures doubled down with curative solutions, such as cleanup operations for existing ocean plastic, will pave the way for cleaner oceans by 2050.

Laurent graduated from Ecole Centrale de Nantes and has 10 years of experience in numerical modelling and physical oceanography. He started his research on the science of marine debris in 2010. Since then, he has authored and co-authored a dozen peer-reviewed publications on the subject, participated in multiple UNEP led working groups and is now internationally recognised in the field of marine debris dispersal research. He has joined The Ocean Cleanup in 2016 to assist the ocean plastic research team in understanding and quantifying plastic pollution in the oceans.

‹ Chasing Plastics: How to Close the Ocean Plastic Mass Balance

The Ocean Cleanup and the Neuston ›