This site makes use of third-party cookies for analytics. By continuing to use the site, you accept the use of cookies. Read more

At The Ocean Cleanup, we’re developing the first feasible method to clean up world’s ocean garbage patches. Five vast areas of Open Ocean, known as the subtropical gyres, act as a trap for ocean plastic. We specifically focus on the North Pacific accumulation zone – also known as ‘the Great Pacific Garbage Patch’ – since about 1/3 of all oceanic plastic is concentrated in that one area between Hawaii and California.

When I founded The Ocean Cleanup almost three years ago, there was no realistic way to clean up these accumulation zones, each several million square kilometers in size. I realized that coastlines are evidently very effective in catching plastic. Unfortunately, there is no landmass in the middle of these gyres, so I then proposed to deploy a very long array of floating barriers attached to the seabed. This would act as an artificial coastline, allowing the ocean to clean itself. We aim to deploy our first pilot system in 2016 and hope to be able to start cleaning the North Pacific by 2020.

Yet a common argument against our efforts is that focus should instead be on preventing more plastic from entering the oceans. I fully agree prevention is top priority. Having to clean up the gyres again a few decades after cleaning up would be nothing short of annoying. But in my opinion, one does not exclude the other – they complement each other.

First of all, the ocean garbage patches do not go away by themselves and hence need to be cleaned up at some point in time. Several years ago, researchers noticed the discrepancy between the amount of plastic floating in the world’s gyres and the accumulative influx of new plastic into the oceans. I believe that most of this plastic ‘disappearance’ occurs before the plastic would reach the open ocean, not after. Thin film objects quickly lose their buoyancy after getting fouled, often sinking near shore. Near the coast, forces such as waves and winds predominantly work towards land, which could cause most of the plastic entering the oceans to beach quickly after leaving rivers or other land-based sources. Sediment research, plastic fragmentation mechanics and initial Mega Expedition results are supportive of this hypothesis. So even if we manage to prevent more plastic from entering the oceans, the garbage patches will continue to cause damage. 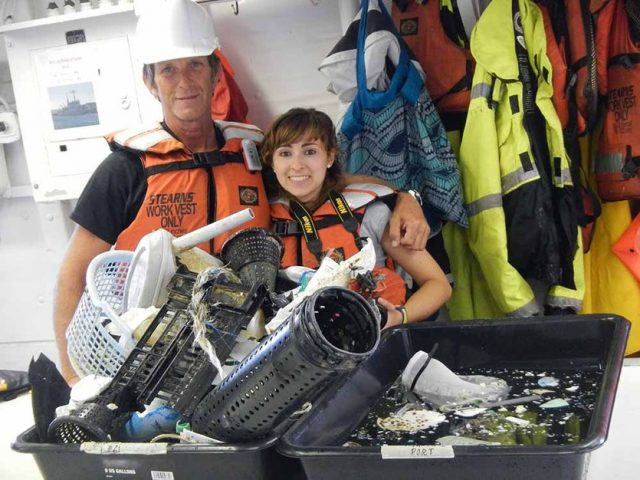 By cleaning up what is out there right now, we also prevent the creation of more microplastics. Over time, in a process called photodegradation, UV radiation causes large plastic objects to fragment into ever smaller pieces. Not only are smaller pieces harder to extract, but they are also more harmful than large objects due to bioavailability to the small creatures that form the base of the marine food web. Small pieces are being consumed by fish and birds, and may thereby transport toxic persistent chemicals into the food chain (which includes us, humans). Through the Mega Expedition, The Ocean Cleanup has been the first to measure the quantity of ocean plastic across all size classes. Initial findings of this expedition suggest that, right now, microplastics only account for a small percentage of the mass of what floats in the ocean. These microplastics used to be large objects when entering the oceans long ago. The same fragmentation process will happen with the vast majority of the ocean plastic mass, which has not fragmented yet. If we do not clean this up, we will see an unprecedented increase of microplastics over the next few decades, which wouldn’t exactly be a good outcome.

You could argue that preventing plastic from entering the oceans would garner you a higher return on investment (ROI): more volume of plastic enters the ocean than can be removed from the gyres. However, when looking at ROI, I believe a better metric to look at is the amount of plastic multiplied by its longevity. The hypothesis outlined above suggests most plastic leaving rivers will stay in the oceans for days, weeks, perhaps months, before getting beached. On the other hand, plastic in the gyres will stay causing damage for years, decades, perhaps centuries. The time that removed plastic would have stayed in the ocean is a factor which shouldn’t be neglected from the ROI equation.

We also shouldn’t forget about the spin-off effects a cleanup project creates. A cleanup project has the potential to make the problem visible and helps people become aware of the problem in general. In the future, it would also allow us to develop spin-off technologies to intercept plastic in rivers before it reaches the ocean. It is very difficult to adapt a system designed for rivers to work on the ocean, but once you have something that works in the worst conditions on the face of the planet, I think it should be relatively easy to scale it down to fit the riverine environment.

Prevention does not mitigate the need for a cleanup operation. Considering the scale of the problem, I would argue that it is key to tackle the problem from both angles. We’ve always been told that the best thing we could do is not make it worse. But don’t we all want the future to be better than the past? A cleanup will make that possible.

Boyan Slat is an inventor and entrepreneur who creates technologies to solve societal problems. He is the founder and CEO of The Ocean Cleanup, the foundation that develops advanced systems to rid the world’s oceans of plastic. In February 2013 he dropped out of his aerospace engineering study at TU Delft to work full-time on this ambitious project. He dedicates most of his time to managing the rapid growth of the organization, while also overseeing the team’s technology developments.

‹ The Ocean Cleanup Array to undergo 3D testing at MARIN

First Cleanup Barrier Test to be deployed in Dutch waters ›